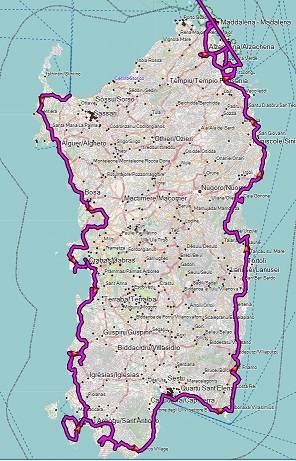 After a somehow disappointing short visit some years ago to the North-West of Sardinia, we decided to give it a second change and spend our summer holiday on the island.
Seen the previous trips were grayish and rainy we now could enjoy three weeks of sun.

We booked the boat via Corsica Ferries to go from Toulon to Porto Torres.
As always, we take the ferry at night.
First thing to do when went ashore: shopping.
Since we visited the North-West already, we skipped a small part of the planned route and started along the coast heading South.
As we wanted to be sure to do our shopping, we decided after a while to use the TomTom and drive directly to Alghero to buy food, and fuel up Olli. 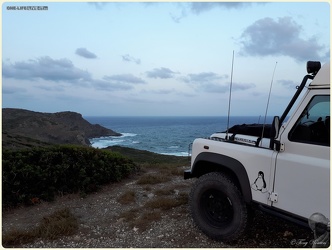 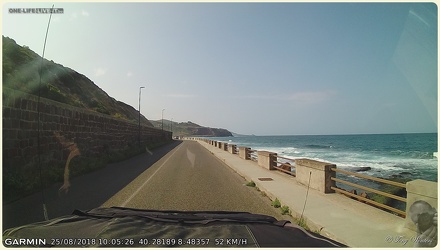 From Alghero we followed the coast South via the SP105 in search for our possible first campsite at the coast.
We realized it was not going to happen in this part. Before we knew it we where at Bosa, and from there the track took us inland to visit Santu Lussurgiu. A picturesque old town, build on the bottom of what used to be a volcano. The town is also known for it horse races inside the town streets. 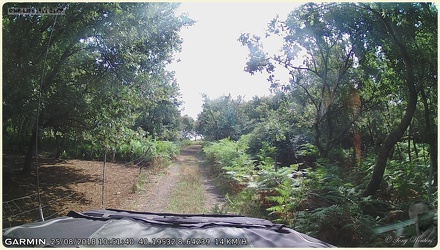 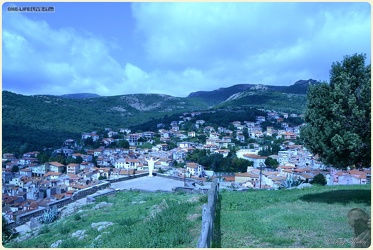 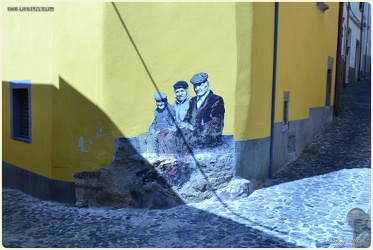 From there it was back direction coast via the small roads and dirt-tracks. Although the map indicated an concrete road, many were off-road tracks with potholes.
Speed wasn’t an option on these roads and with the views, and although it wasn’t late, we both were getting pretty tired from the trip from home to Toulouse.
At what looked like a man-made parking lot next to the mountain track, we decided to set-up camp, and be just lazy the rest of the day. 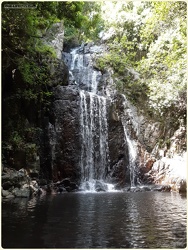 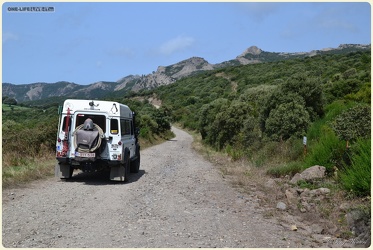 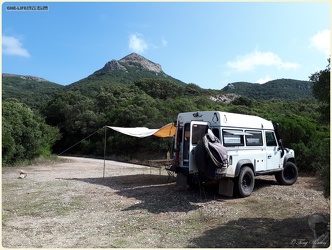 After a good night sleep, a relax morning and a walk to the near river, we continued downwards direction coast. Not long after we realized we did good to stop at the first spot, as there wasn’t any suitable camp spot during the rest of the track. 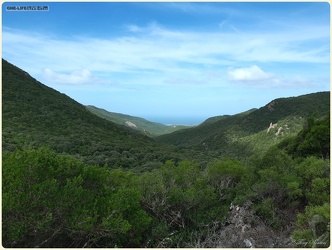 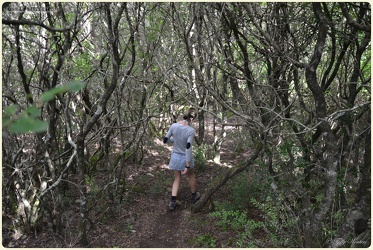 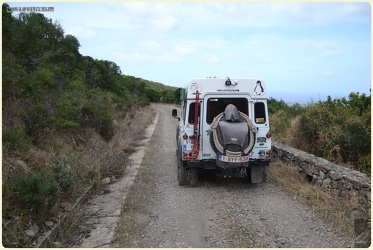 We arrived at Torre del Pozzo. A small coastal tourist village. We continued the track when all of the sudden we saw what looked like a salt flat. We turned around, parked Olli and went for a walk. It wasn’t a salt flat, but just nearly dried out lake. We walked on it as far as we could, before we would get stuck in the mud. Some two hundred meter furter there was water again, and plenty flamingos. Of course, no zoom lens with me at that time. 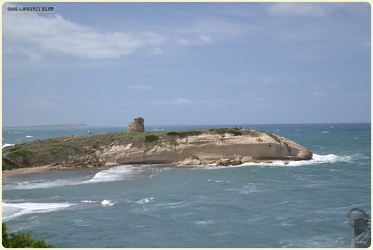 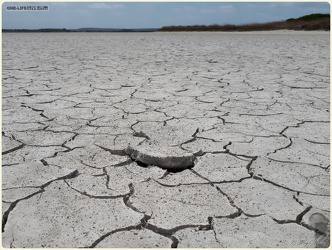 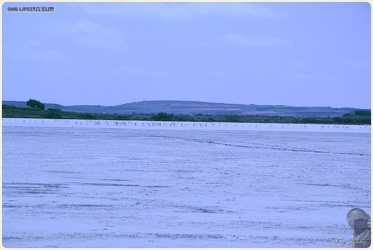 After lunch we continued our planned track along the coast and via the SP66 we took a dirt track bringing us at the edge of the cliffs. This was a very nice track with great views. The end of the track brought us at Portu Suedda / Mari Ermi. This must be surfers paradise on Sardinia, as it was full of wind- and kite surfers. 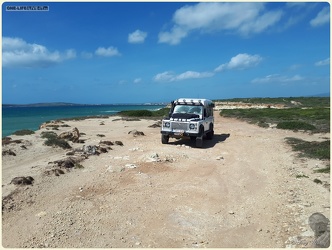 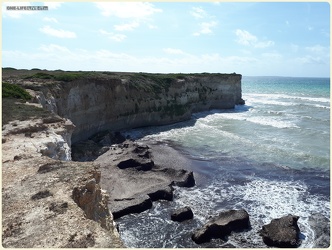 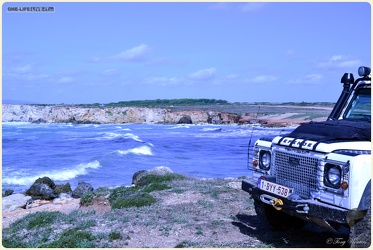 We continued south, and via the SP59 we drove to Tharros. This is an archaeological site dating back to the 8th century BC.
After visiting the open air museum we had lunch in San Giovanni di Sinis and headed back from were we came, as we marked a good camp-spot earlier. 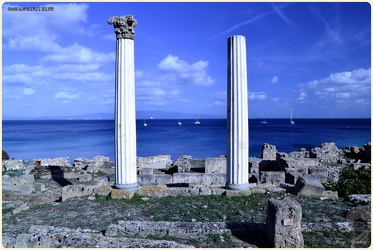 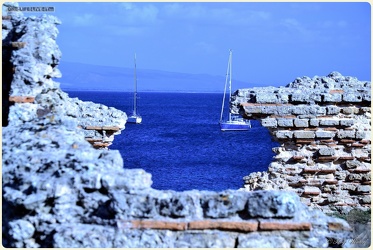 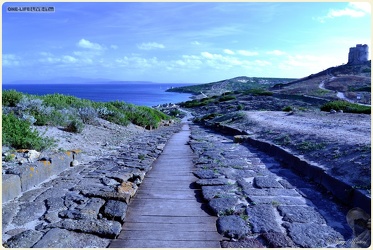 Next morning, after a browse in our little tourist guide we headed towards Crabas. Described as a little fishing town we were pretty disappointed as there was nothing special to see. But around the lake there was a possibility to spot many flamingos. The co-pilot guided us with the aid of our maps to some smaller side lakes. We headed direction open view to the lake, but this was a bad idea. The track was near the lake, and someone left the irrigation pumps open, making it a very wet and slippery track. To be on the safe side, we decided to turn while we still could. A bit disappointed at that time, as the rest of the lakes were surrounded by high reed making it impossible to see through. The moment we managed to turn Olli around, we spotted the birds just some 10 meters away. We happy. Until I saw not much later that my camera setting were wrong, and I had blueish photos. Still we saw them pretty close in real life. 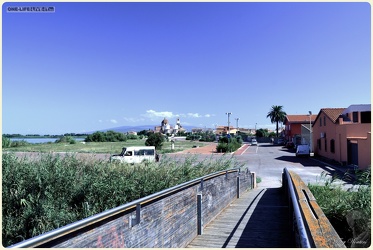 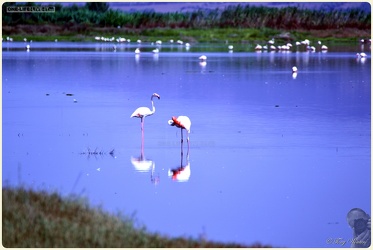 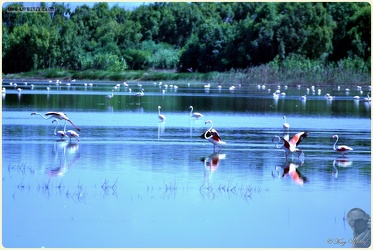 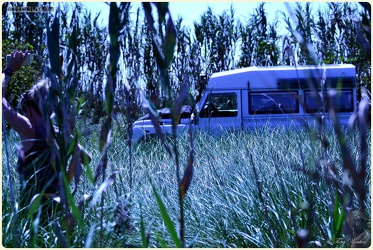 We moved on south, in search for a place to camp. Along the SP66 we found a nice place at Portu Maga. Just at the end of the beach, where a normal car can’t get, we found a spot to install our selves. We decided to stay at least 2 nights before we moved on.
The afternoon and next day were lazy and enjoying the Sun, See and Snorkeling. 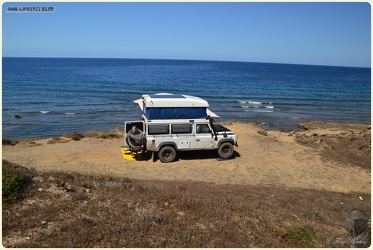 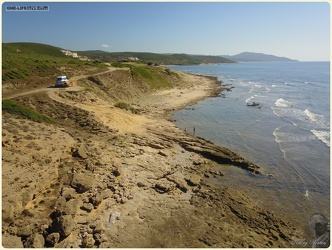 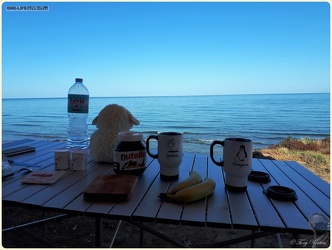