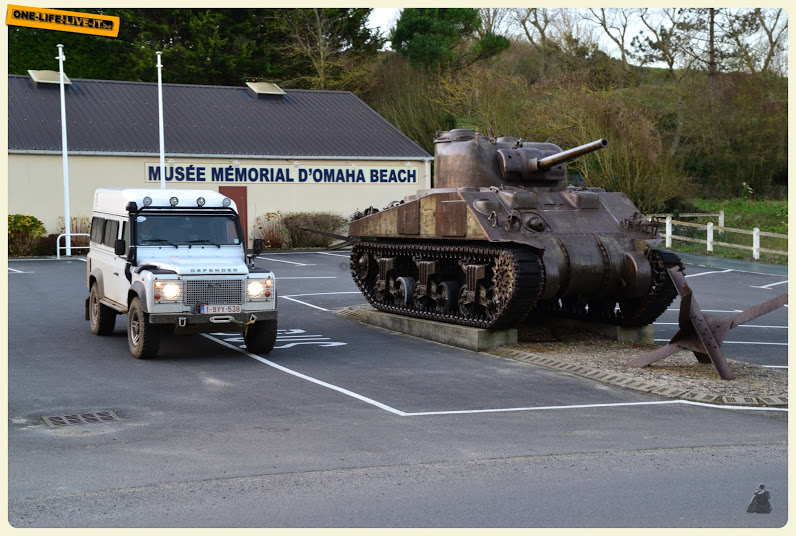 Not in the mood for the end-of-year fuss, we went this last week of the year to Normandy

We leave home around midday to arrive by nightfall at our first camp spot: Pointe de la Varde, near St-Malo. It was a windy night, but with a nice temperature, thanks to our stove.
After coffee and breakfast a small walk in the neighborhood before we set off to visit St-Malo.

From St-Malo we go to the Mont-St-Michel. We follow the coastline and the small roads to suddenly see the island appear on the horizon. There is not much choice to park, actually only 1: The official payment parking. From there you can either take a shuttle to the island or on foot. We are going for the latter. After a pleasant discovery of the island, we decide to search for a place to sleep near the next day’s goal. A road-book that starts at the Pegasus bridge in Bénouville. We found a sleeping place quickly, at a 500m from the bridge. We slept again great and after a nice breakfast in Olli we drove to the Pegasus bridge, where there is also a museum. Bad luck: Museum is closed. Outside we took some pictures of the original bridge and then started the road-book.

The roadbook took us along different WWII sites to the beach of Courseulle or Juna Beach. Because the various sites were closed we were faster than expected at the end of the road-book and decided to continue to Arromanches, Omaha Beach and Pointe du Hoc. The plan for the next day was to visit St-Mere-Eglise and find a place to sleep there, but first look for something to eat. We found that at Grandcamp, where we ate at La Maree. After some driving around we found a meadow where we could stand, open the tent, and sleep.

After another windy night, it was towards the center of St-Mere-Eglise to visit the Airborne museum (http://www.airborne-museum.org). Fortunately, this was open. After seeing several aerial photos we realize that we probably slept in one of the meadows where many Wacos and Horsas landed in the night of 5 to 6 June. St-Mere-Eglise is of course also known from the paratrooper who hung on the church tower: John M. Steele

From St-Mere-Eglise we went via the batterie d’Azeville back to Juna Beach to start with the second road-book: Courseulle – Arromanches. Arromanches is located near Bayeux and we booked a hotel for 1 night. No WWII sites came along with this road book, but it was a nice ride. In Arromanches we took some pictures and then went to the hotel.

Last day of the year. We visited the American cemetery at Omaha Beach, the commonwealth war cemetery and the Batterie de Longues-sur-mer, and then head off to Honfleur where we went to eat for New Year’s Eve at L’Assiette des Mondes (http://www.assiettedesmondes .fr /). Friendly welcome and delicious cuisine with a mix of French, North African and Oriental cuisine. Highly recommended.

New Year itself we celebrated in Olli with a bottle of bubbles from our champagne friends. 2016, the first day of the new year. We went to the center of Honfleur for a short while and on the way home we went to Étretat to come home, mostly through secondary roads.

This website uses cookies to improve your experience while you navigate through the website. Out of these, the cookies that are categorized as necessary are stored on your browser as they are essential for the working of basic functionalities of the website. We also use third-party cookies that help us analyze and understand how you use this website. These cookies will be stored in your browser only with your consent. You also have the option to opt-out of these cookies. But opting out of some of these cookies may affect your browsing experience.
Necessary Always Enabled

Any cookies that may not be particularly necessary for the website to function and is used specifically to collect user personal data via analytics, ads, other embedded contents are termed as non-necessary cookies. It is mandatory to procure user consent prior to running these cookies on your website.