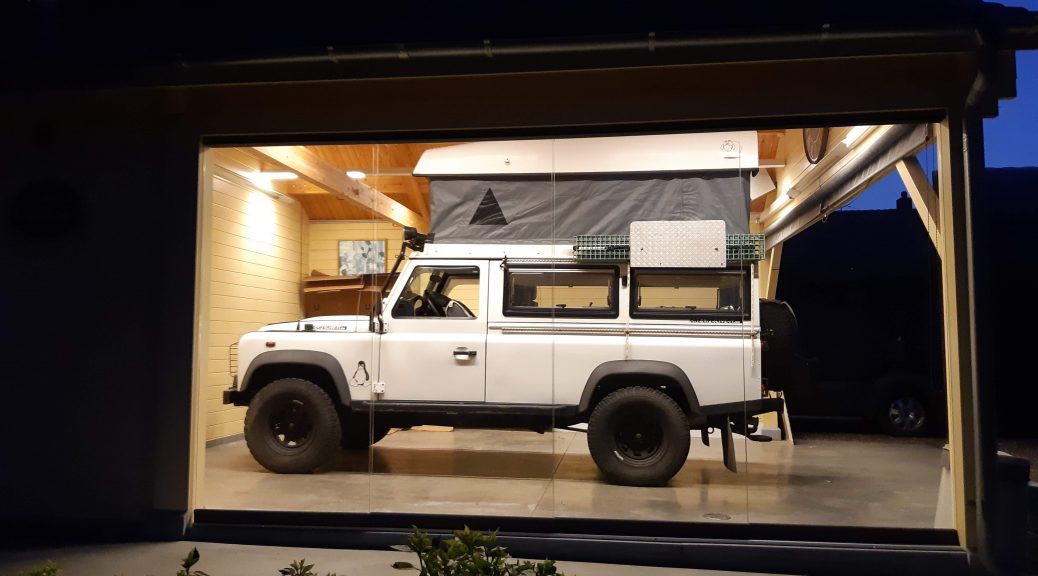 After five great years of having fun and great trips Olli moved on to another owner.
The decision was far from easy, but as years passed our traveling needs changed.

To fulfill these needs we investigated to rebuild Olli, but unfortunately due to EU regulations strictly followed by the Flemish government and the lack of collaboration by Land Rover this was not possible.

So with mixed emotions we put Olli for sale.
It didn’t take long before a long time 4×4 friend contacted us. His dream car in current configuration was for sale.
For us it was a relief knowing where Olli was going and knowing he would be in very good hands.

Getting the papers to sell Olli was a 2 weeks nightmare.
After five years of passing the yearly technical conformity and safety operation checks they suddenly say the popup-roof is not allowed, thus Olli not being conform with the COC (certificate of conformity)
Due to this, we couldn’t receive the papers to sell Olli and would have to replace the pop-up roof with the original.
Luckily we predicted five years ago that something like this might happen and thus we made sure we had proof they accepted Olli with the pop-up roof from day one, and this 5 years in a row.
So we made up a document proving the 5 years passing and also profoundly argumented that the current EU regulations are not applicable to a vehicle built like a Land Rover and the changes to the roof are within the COC. This document was sent to the several authorities responsible for vehicle regulations in Belgium and Flanders.
At the same time we did try to start the COC phase 2 in order to regulate the pop-up roof. We contacted several official rebuilders, all said it should be no problem, but they all forgot the first step: Approval from Land Rover. And there it ends. Land Rover Belgium lacks cooperation and is no longer giving approvals for modifications.

Almost two weeks passed by, and we were already planning the nearly impossible rebuild to the original roof. Our friend also started to settle in the idea he won’t be able to buy his dream.
Until that email came in stating they accepted our arguments and that the vehicle can be accepted in the state it is, with the popup-roof.
What a relief.

And so, after five great years with Olli, we were able to let him go, and start new adventures with a new family of which we know will take very good care of Olli.

For us, Olli’s successor is nearly coming home.
Dexter will take us to new adventures.