Day 1
After a smooth first real long drive with Olli, we arrived without physical and mechanical complaints in Villard-sur-Doron, it was time to find a place to sleep.

As it was already quite dark, and a fairly inhabited area, we used a France Passion address in the area. A quick phone call to Françoise et Yvon Bochet from Gîte de Plan Mya in Beaufort and we were allowed to camp on their ground. We hadn’t eaten yet, there was nothing in the area,  so we started day 1 with a part of our emergency ration : Ravioli. Warming up in the gamel inside Olli on the gas fire went super.

We were already pretty high in the mountains, and that was noticeable on the temperature at night. It was just above freezing, and will remain that way for the rest of the trip through the Alps. Next morning, get dressed, boil water for coffee and have breakfast inside in Olli. Space is just enough for the two of us. Breakfast inside will become a habit in the coming days. We both are glad that we have foreseen this. 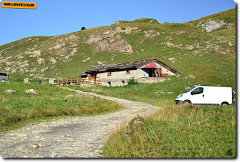 A thank you to the hostess and host, and bought 2 of their homemade salami sausages for the upcoming aperitifs. Quick back to Villard-sur-Doron to do some shopping and then start with the planned route for day one that brought us to Lac du Mont Cenis, where we spent the night at 2008m and applied an experiment to counteracted the cold:  hanging our fleece blankets around. It worked partially, and since we didn’t get all the way around us, it remained a cool night.
A few forts can be found around the lake.


Link to album
Some random photo's:

Enjoyed the hot coffee and ready to start the 2nd ride. This should take us via a “detour” along Italy to Montbardon. The first few km of the route started well. Very narrow mountain road with a “stone” that was in the way. Shit … 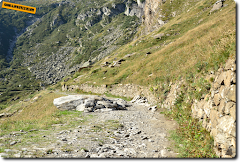 Reversing would be a very difficult task and only be chosen as the very last option. After inspection of the rock we came to the conclusion that it should be possbile to cross it. Diff-lock on, first gear and no extra throttle. He passed smooth. It was a long time ago that we made a tour with a defender, but that habit came back soon. Also the pleasure of it.


Hoping that it it was just that, we continued at ease. We came after a long but nice ride over

Testa D’el Assietta at Sestriere were we had a late lunch.

It is just after 3 p.m. and most restos have their kitchen closed until the evening shift. Fortunately there is a sandwichbar where we can eat something.

The off-road ride was pretty and long, but still quite tiring. There was still a short piece of off-road to the next sleeping place, but we dropped it to drive relaxed through the normal roads to the same sleeping place. The goal was to continue to enjoy the journey. 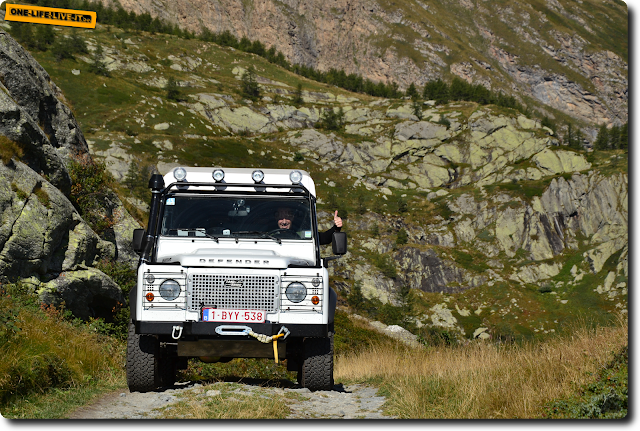 Departure at Montbardon towards the Col de Parpaillon.

Soon we arrive in Risoul. Within a few months it will be very busy here, but now, just like in all other French ski villages, it is dead.
Not even a mice.

Up the road along the ski lifts. No mice, right, but sheep? Plenty. 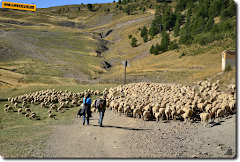 We calmly follow the herd upwards until they arrive at one of their pastures. It is wonderful to see how the dogs keep the sheep together. Once we reach Col de du Vallon, we descend again. Until a mountain cow with her young meets us. The young is a bit restless, so we stop until they passed. We continue, and there is the rest of the herd. Spread over the length of the road, they quietly walk to the farmer who is waiting to milk them. A phenomenon that we have seen throughout the entire Alpine ride. Past the cows, we can make some speed again. We start at Crévoux to climb towards Col de Parpaillon. A beautiful route, rewarded with a beautiful view at the top.

Just place the gopro (I finally think about it) and through the tunnel. Pretty spooky.

Once through the tunnel we are rewarded with a beautiful view.
Here we’ll have lunch.

The stove is on, water almost boils for pasta, suddenly some 20 sheep come up and drink from the puddle about 5 meters from us. Realizing suddenly that a herd of 20 sheep is non-existent in the mountains I ask Bolle to take a look over the hill. And yes, there is the rest of the herd. There are in no time at all, I estimate, about 100 shapen and a few mountain goats. They are reluctant for a while, but get used to it quickly. We as well. Quite nice to eat spaghetti among the sheep.


Time to go down the road. Again beautiful views. The road is a lot worse than on the other side, but nothing that Olli can’t handle. 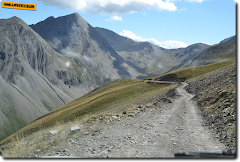 Once below, relatively, because we are still at 2060m, we arrive in a beautiful valley. We will spend the night here.
Suddenly I see the animal that has taken hold of me for a few days. Every time I heard the call, I was searching in the air. It seemed like a cry of a bird of prey. But this one I saw now had no wings, but a thick fur. A marmot, and another, and another … A whole lot. Today was animal day.
A little further a river flows, ideal for a wash from head to toe.
Yes, the water was rather fresh.

Getting up at ease, enjoying the sun, a walk through the valley, and then hop, to the next stop: Isola. Again along beautiful roads (on and off-road) we drive through and over the mountains. We drive via Cime de la Bonette (2860m) and it is a strikingly different kind of mountain range. Large rocks are lying here and there, as if everything has been carefully shaken up here. The views, however, remain beautiful. Arriving at the ski resort of Isola, it is dead, just like all the others. We cross the Tete de l’Adrech d’en-Barris and stop a bit further at a small lake to spend the night there. A little earlier there was a nicer place at a weather station, but the presence of a webcam did not really make it ideal. 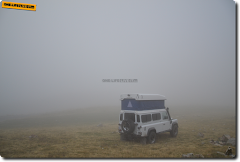 We wake up in the fog. Fortunately, we do not have to go outside to get ready and have breakfast.
Today we drive for the most part over the road to France again. The intention is to enter France through the Tende tunnel, and then directly into the mountains. Road works decided otherwise. After standing still for 30 minutes we can go through the tunnel. Once out of the tunnel they are fully working there and the mountain road that we have to take to the beautiful fort and old barracks is closed. There is no alternative to get there. Darn …  We continue to roll until we get back to the planned route, and dive back into the mountains. We are clearly getting closer to the coast, because the highest cols barely reach 1000m. After a long drive we drive back into the mountains at Sospel, on our way to our sleeping place near Baisse du Pape at 1090m altitude.We get a beautiful view with a part of the Mediterranean Sea in sight. The temperature is also a lot nicer.

Today we are going to make a lazy day out of it. We are on a GR route, ideal for a walk. Despite the beautiful morning, clouds still appear in the sun. The valleys on which we have an overview are also filled with fog. There is a striking white cloud that is developing rapidly. We are close to the coast, so perhaps normal. During the afternoon dishes, I suddenly notice something like a snowflake swirling down. Shafts! 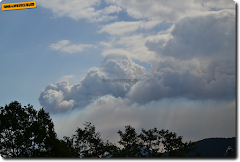 That explains the “fog” we see.
As a forest manager was busy in the area earlier this morning, and in the meantime he had already left and did not tell us anything, we did not mind. I thought he had laid out a fire strip so that the in case of a forest fire, it could not spread any further. Until a few minutes later, the fog started to get very bad from between the trees, and the smell was clearly a fire odor. As quickly as we could we packed everything. We had only just begun or a heli was flying just above us. We suspect that they wanted to be sure that there were no more fire spots.

Via the road we went to the coast to do some shopping there and find a new place to sleep. 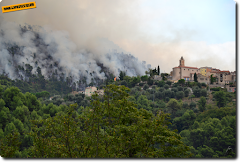 At Menton we found the cause of the smoke and the odor. 2 mountain ridges there were on fire. That was also the source of the white cloud we saw that morning. We were 11 km from the forest fire, and were already suffering from it. We cannot imagine what it must be like with a large forest fire.
Link to article

Since we would not find a place on the coast itself, and the smoke was less by now, we returned to our original place to sleep. The smoke had disappeared, we could sleep there.

After a restless sleep because of the forest fire, we will start today on the last leg of the trip through the Alps. We had finished what was planned for 9 days at 7. Without having to force ourselves.
Off to Monaco. Via another nice road we arrive at Monaco. The idea was to park somewhere and discover it on foot. We drove around 3 times, without finding a parking space, and then we went further along the coast to Nice. Since we could use a decent shower, it’s time to drive to a campsite. We knew one when we were there 15 years ago with the mobile home. Off to Ramatuelle, just below St-Tropez, via the coastal road.